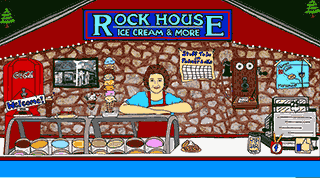 The 82 acres surrounding the Rock House was deeded from the United States of America to Arthur McIntyre in August 1870 for only $165.54 with taxes of 50¢! 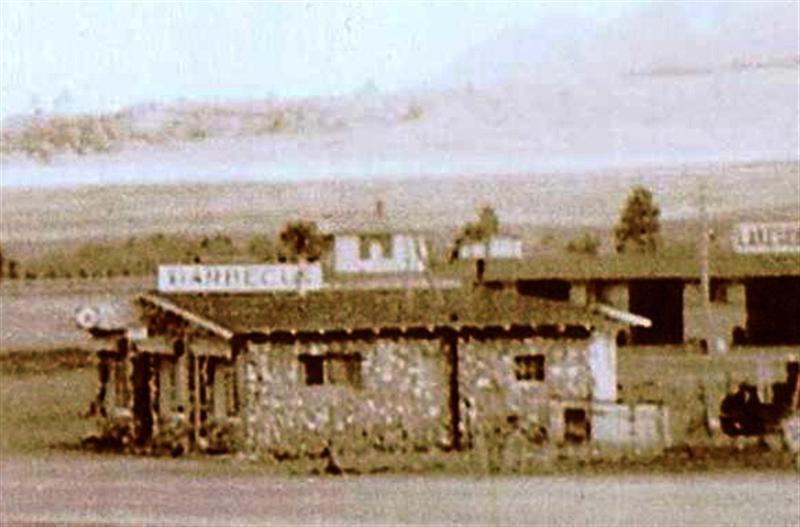 The Rock House structure was originally built in 1927 by Frieda Hubbard and her sister Faye Bellinger.  The white quartz rock was taken from Sundance Mountain and hauled out by Frieda, Faye and Jerry Kendrick with the help of a donkey cart. 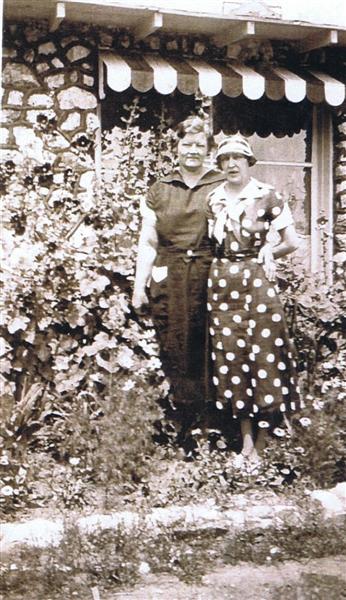 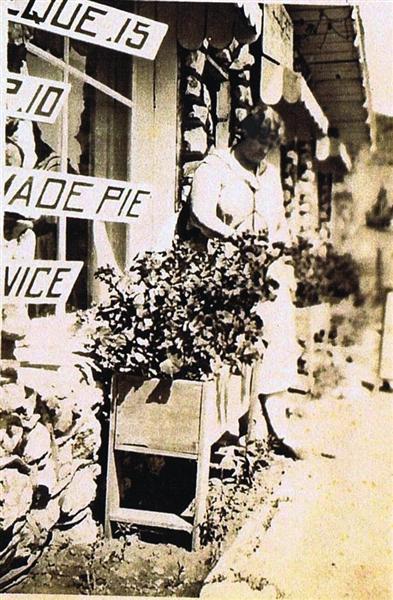 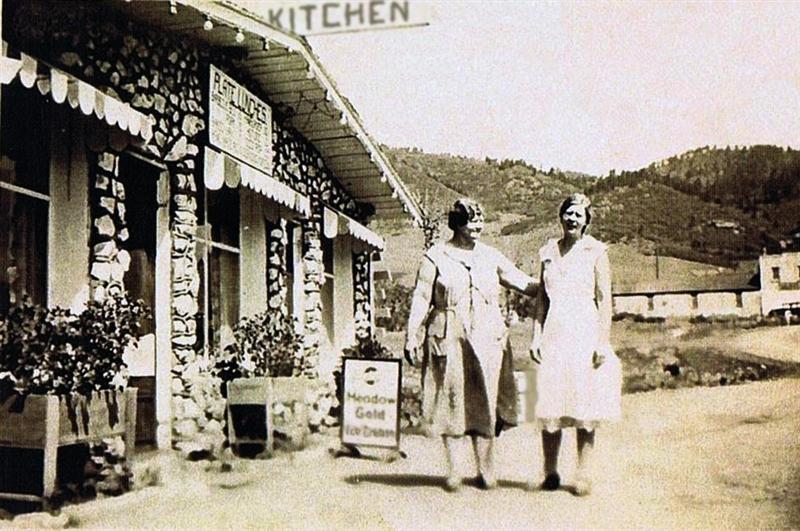 Frieda and Faye opened the “White Kitchen Cafe” and ran it as a successful truck stop and café through the 30’s and 40’s.  During the 1930’s Highway, 105 was the main thoroughfare from Colorado Springs to Denver.  Many times they stayed open 24 hours a day during snow storms to give food and shelter to travelers passing through Palmer Lake. 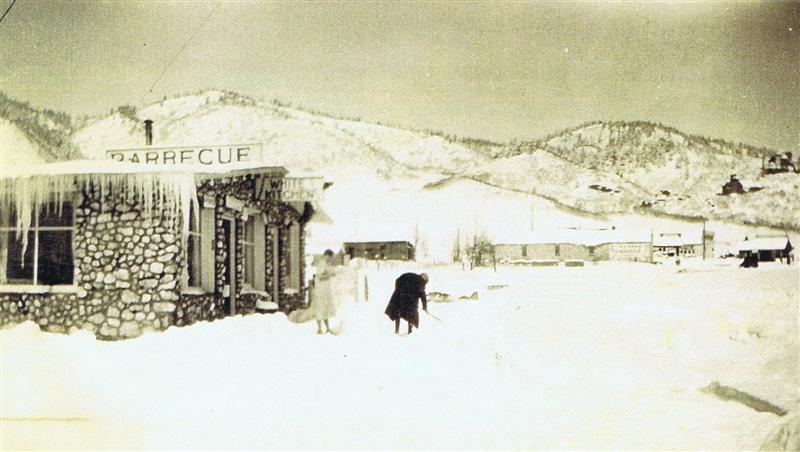 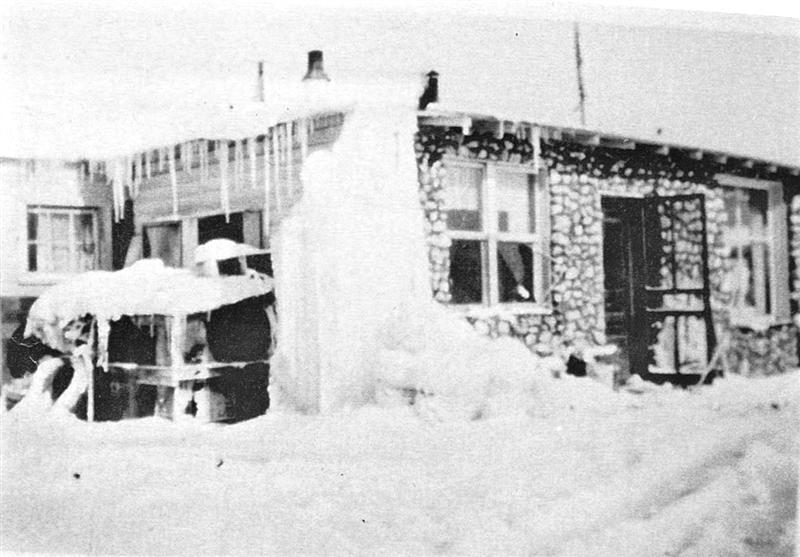 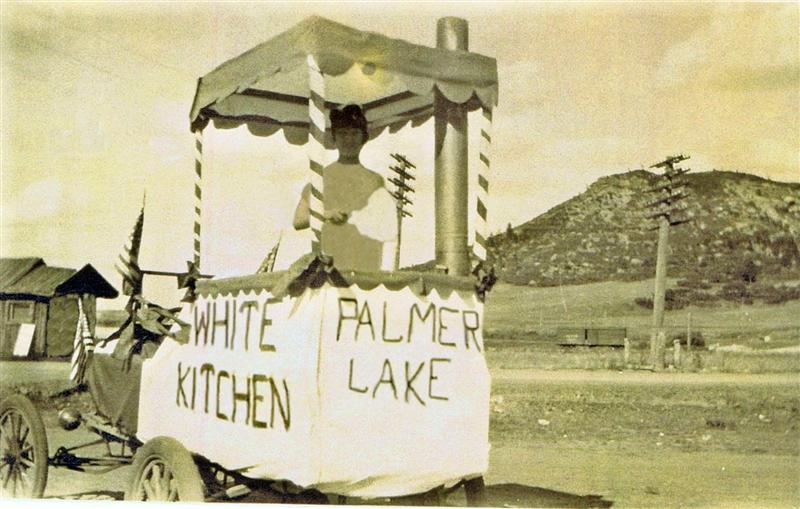 The White Kitchen Café later added a Liquor Store and Gas Pumps to meet the needs of a growing community. 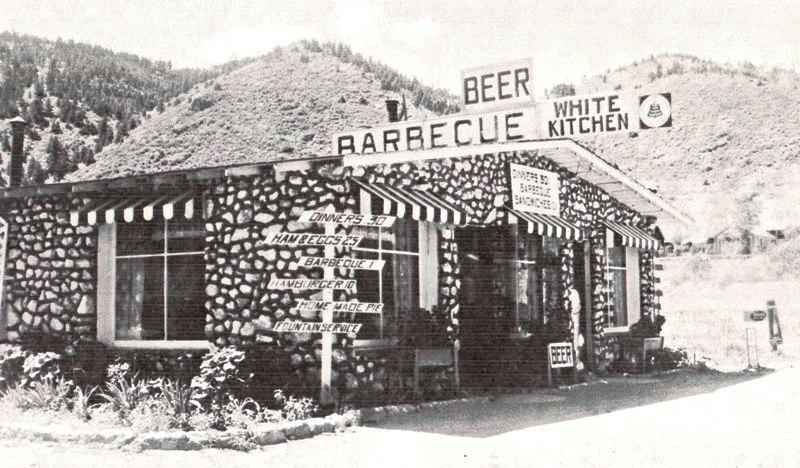 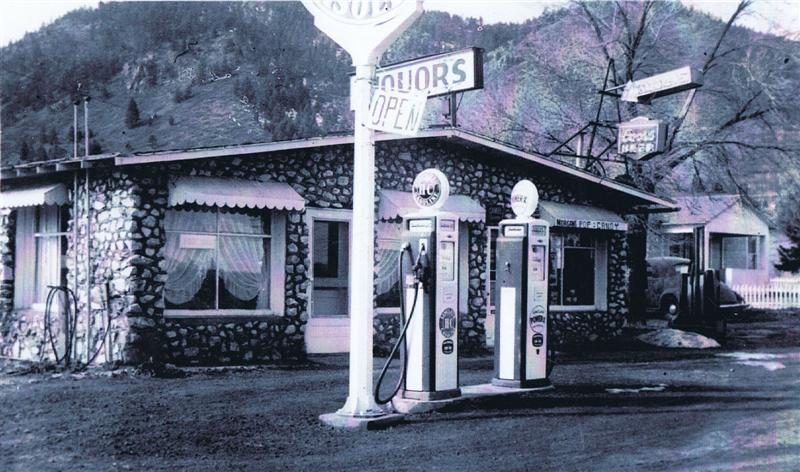 In the late 1940’s when the new interstate highway (now known as I-25) diverted traffic around the tiny mountain town, the White Kitchen Cafe became a private residence. 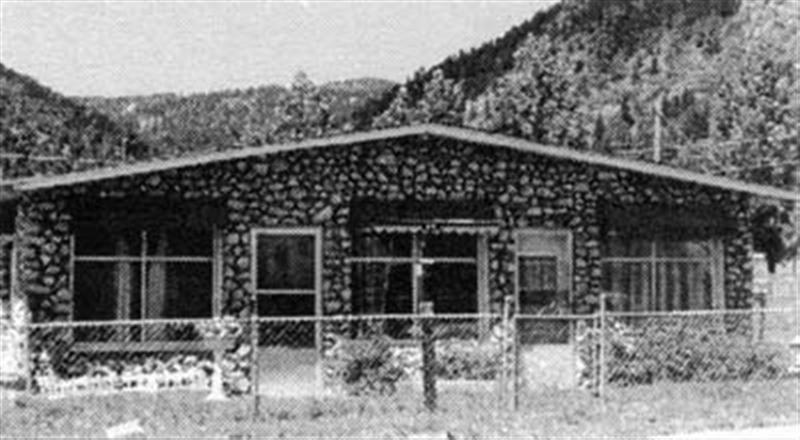 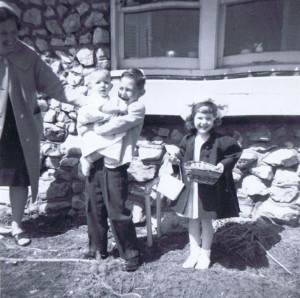 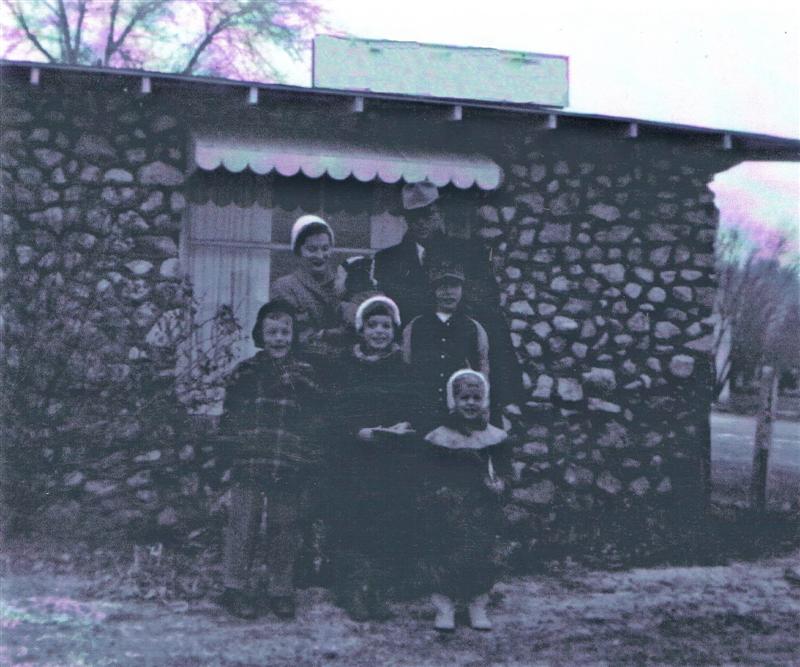 The building has been a private residence for 40 years until Jeannine Engel, a native of Palmer Lake, purchased the Rock House building in 1998 with the dream of re-creating the small town ice cream café of the early 1900’s.  After extensive renovations, “Rock House Ice Cream & More” opened in June of 1999 and began serving the best ice cream, pie, chili and hot dogs in the area! 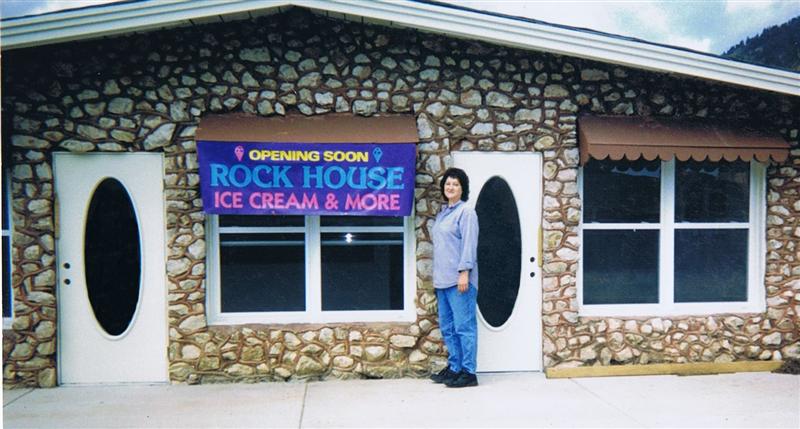 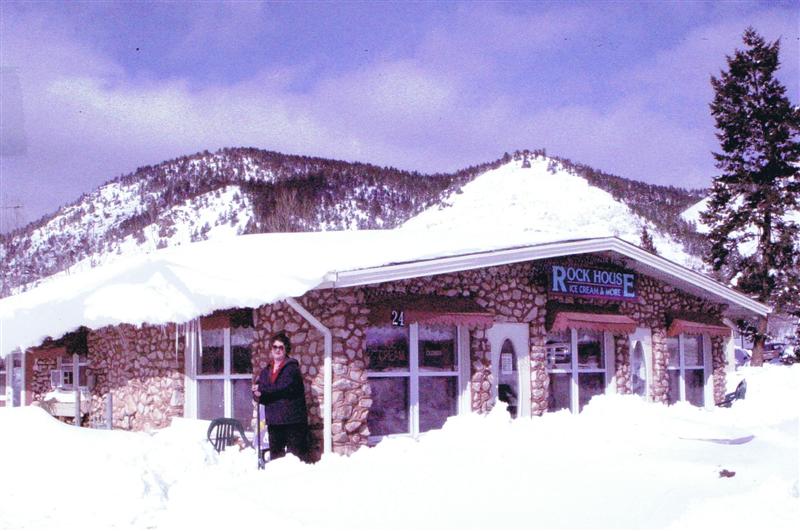 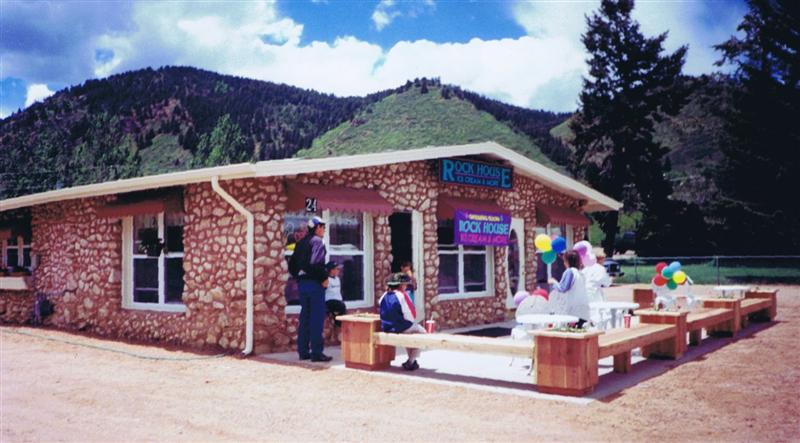 An Army expedition, led by Colonel Henry Dodge, visited the Rocky Mountains in 1835 and mapped a body of water which they named Summit Lake. Afterward, the name changed to Divide Lake, and finally, Palmer Lake. The lake sits on the Palmer Divide where watershed drainage separates the waters of the Platte River to the north and the Arkansas River to the south.

The Palmer Lake area has a remarkable history including events associated with the “wild west.” There have been Indian raids and saloon shootings. There were several forts in the area where settlers could hole up until the trouble passed. One of these was the “McShane Fort” located just off Highway 105, close to the railroad overpass. Posses have apprehended and strung up murderers on the outskirts of Monument and Palmer Lake.

The area was home to five gold mines; however, none hit the mother lode. The Greenland open space area to our North once shipped more cattle to market than any other location in Colorado.  The Goodnight-Loving cattle drive from Texas came through our area ca 1866 and over the Palmer Divide.

General William J. Palmer, a Medal of Honor recipient, came west after the Civil War to found the City of Colorado Springs & start the Denver & Rio Grande Railroad, a 3-ft. narrow gauge line, in 1871. He purchased the land known as the Monument Farms & Lake Property which was to become the Town of Palmer Lake.  (The 82 acres surrounding the Rock House was deeded from the United States of America to Arthur McIntyre in August 1870 for only $165.54 with taxes of $0.50.)

In 1872, the lake was a critical stop for the railroad because the steam trains chugged up to the Palmer-Divide summit and had to take on water to head down. The lake was the only natural water supply available on a year-round basis. Passenger trains would stop for 10 minutes to take on water, or you could get off for a day of picnicking, fishing, and boating or wildflower hikes for a fee of $1.50 roundtrip from Denver. Later, ice houses at the south end of the lake furnished ice by contract to the D&RG Railroad for use in “refrigerator” and dining cars.

Palmer Lake is a spring fed lake, sitting in a low spot of Palmer Divide between Metro Denver and bustling Colorado Springs. Its waters uniquely drain both North and South. To the North, into the Platte River, route of the Oregon Trail, to the South into the Arkansas River route of the Santa Fe Trail. This little mountain lake links the two most famous historical trails of U.S. History.

By 1882, the town began enlarging the lake to its present 10 acres. A boathouse, public park, fountain and covered pavilion were added to help attract tourists. It is believed an underground spring originally fed the lake. In dry years, water has been piped down from the two reservoirs in the canyon between Chautauqua and Sundance Mountains in which North Monument Creek flows. The reservoirs were built by the railroad to replenish the lake. (Today, they serve as drinking water for the town.)

Dr. William Finley Thompson, a dental surgeon born in Ohio, who had practiced in Omaha, Portland, San Francisco, and London, England, came to Colorado in 1882 and soon platted the Town of Palmer Lake, intending it as a health and vacation resort. He built the Victorian mansion, Estemere, in 1887 for his family, but faced bankruptcy in 1890, when he left Palmer Lake to raise capital.

Prior to the automobile, Palmer Lake enjoyed visits from Denverites and others wishing to beat the heat of city summer temperatures. The Rocky Mountain Chautauqua, a people’s vacation University, was active from 1887 – 1910, hosting festivals and programs in music, art, drama, religion, & nature.  The Rockland, a sixty-one room hotel, provided all the amenities any visitor could wish for to include a petting zoo.

Enterprising craftsmen recognized this as an opportunity to provide summer housing vs. canvas camping. In addition to pavilions for all to gather in, they built cute efficient tiny houses for folks to enjoy their Mountain retreat. The area to the immediate south of Palmer Lake is where these Tiny Houses were perched on ascending hillsides at the very edge of Rocky Mountains. They called the area “The Glen,” probably a tribute to romantic Scotland.

Visit www.palmerdividehistory.org for a fascinating history of Palmer Lake!